Almost Half of My Life

Let me tell you a little story.

There once was a troll that happened across a beautiful maiden. The maiden was kind to the troll, treating him as she would any friend. The troll feared that the maiden would soon see him for what he truly was, so in his desperation he acquired a magic ring that would forever bind the maiden to him.

Years passed and the troll felt bad for deceiving the maiden. He confessed that he had tricked her into staying with him. To his surprise the maiden had a confession of her own. The ring he had given her held no magic at all. She had stayed with him all those years because she wanted to.

In all seriousness, today is my 15th wedding anniversary. It's sometimes hard for me to grasp that a decade and a half have passed since I tricked that beautiful maiden into marrying me. Though at the time we thought we were so grown up, I look back and realize we were only kids. I mean, just look at those two baby-faces. I was 21 and she was only 18. And before you ask, no we didn't have to get married. No little buns were in the oven (that didn't come for another nine years). Not knocking that, but when we announced that we were getting married, that was the first question on almost everyone's lips. We got married because we couldn't imagine it any other way. 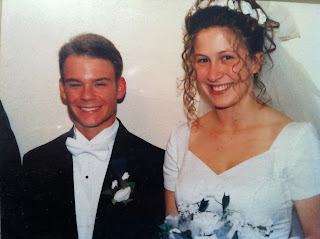 I realize now the reservations our families had. Marriage is a full time job, and many people just aren't up to the task. If either of my children come to me at the age of 18 and say they are tying the knot, I'm sure I'll get the same look on my face that my father-in-law had.

But thus far we've made it work, and I hope we continue to be blessed in that fashion.

Brandy is the best women I've ever known. She's gentle and strong. Smart and kind. She has never once told me to shelf this writing thing and has total faith that I will one day make it big. And any writer worth their ink knows how much support like that really means. She makes this old troll a better person.

If you take into account the two years that we dated before we were married then I've been with this wonderful woman almost half of my life. Time really does fly when you're having a good time.

Anyway, I'm not much for sap (I'm a sappy person deep down, but the troll in me hides that fact like a bar of gold) but she deserves a bit of sap from time to time. I know when we first started out we had "our song". To my shame I can no longer remember what "our song" was.

Don't judge me! I'm sure she doesn't remember, either (he says with a pensive wince).

Anyway, back in the late 90s I listened to a little more country music than I do now. Kind of burnt myself out on it. But there was one song that always brought that lump up in my throat and it rings more true today than it ever did back then. I wish I had the talent, or at least the courage, to sing it to her myself, but the troll won't let that happen. So I'm afraid this will have to do.

Thank you Brandy Michelle for sticking with this grumpy old troll and filling half of my life with such joy.

Happy Anniversary. I love you.

Do you prefer to listen to your books? Would you like a free book along with a 30-day FREE trial?
If yes, then CLICK HERE and you can have 30 days FREE on Audible.com along with my short story collection CONTEMPLATIONS OF DINNER.

My Other Social Media